Well, to answer the question as to whether Jessie would sleep and allow us our drinks by the pool, that would be a no… I spent an hour trying to lull her to sleep with my gentle “shhhhhs” and soft head pats, but she wasn’t having a bar of it and so we stripped ourselves of our glad rags (who even says that?), and replaces them with the villa robes. She finally went to sleep about a half hour later.

Prior to the going to sleep saga, we didn’t have an overly eventful day, which is why I’m merging yesterday and today’s blogs together. We did do a touch of shopping – Craig got himself a shirt and tee, and I got myself a linen jumpsuit… all the rage over here.

We ended the day by going to check out Seminyak/Pettitenget Beach – it was nice enough, though I wouldn’t be getting in the water… the waves are absolutely massive! I can see why Bali is a surfer’s dream. They had a cute swing set up on the beach for photos looking out to the water, which we surprisingly managed to get on right away… usually these things have a queue. From what I’ve seen advertised, there are whole areas dedicated to things to sit on/in to get that great instagram shot. 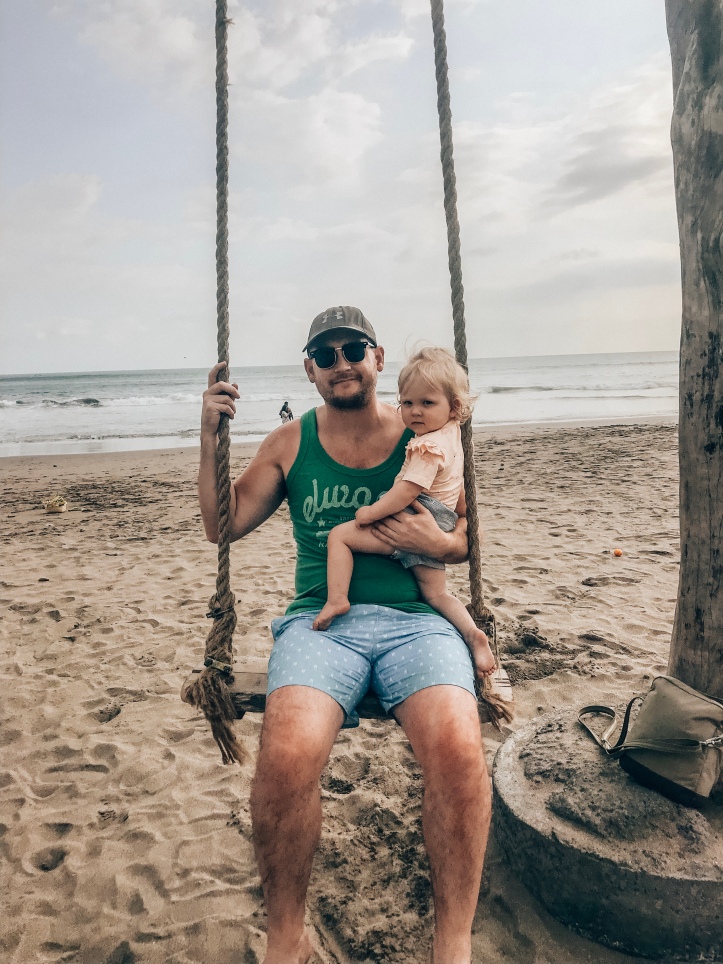 This morning we slept in quite late, with our only solid plan for the day being to go to La Plancha for dinner, which is a beachfront restaurant at the more eastern end of Seminyak (pretty much Legian). But after having a bit of a think about what else to do, we jumped in a taxi to Canggu, which is basically the next area over from Seminyak, to visit a shopping “village” called Love Anchor – it was about a half hour drive from where we’re situated, and whilst being a very cool little spot, there isn’t a heeeeap of other things to look at in that particular part of Canggu (that we could see), so I’m not sure it is a destination for a taxi – maybe better on a scooter. Anyway, we decided to grab some lunch at nearby cafe/bakery Monsieur Spoon before heading in – the taxi driver didn’t have any air con going and we were all near passing out when we arrived, so we sat down in the cute courtyard of the cafe, and immediately Jessie was whisked away by staff after we’d ordered – we enjoyed a bit of peace while drinking our juice, and watched as Jessie did the rounds of the staff, went inside at one point and emerged with what looked like a friand in hand (safe to say she was not interested in her pumpkin soup after that, but she was certainly satiated). All replenished, we headed back over to Love Anchor. The Balinese have certainly got aesthetics down pat… I was absolutely drawn to this place purely based on how it looked. Fortunately it turned out to have a few bits and pieces we liked and bought, including a pair of shoes whose lookalike I’ve been eying up at home, but cost around four times what I paid today… perhaps they won’t last as long, but I’m chuffed.

We thought we’d better head back to the villas after our shopping spree – as I said, there wasn’t much else to look at and it was getting on for 2.00pm, so we thought we might still be able to squeeze in a nap before leaving for our dinner. I had planned dinner to be at 5.30pm in hope of securing one of the colourful beanbags and umbrellas situated on the sand in front of La Plancha, but unfortunately they seem to be extremely popular and are on a first in first served basis – even though we arrived a half hour before our booking, they were already all taken, and so we headed to the table reserved for us on the ground floor of the two storey building. The music was pumping, and there were lots of people streaming in and out, so I can imagine it is a spot that really goes off later in the evening. Jessie was given a high chair fit for a royal baby, which she didn’t seem to appreciate as much as I did, and we had a lovely share plate style dinner. I’d definitely recommend La Plancha, but I would say aim to be there maybe around 3.30pm, so that you can nab those beanbags and watch the sunset. Inside is nice enough, but it feels like you’re being ripped off when you can see how good the beach looks. There are also a lot of flies inside, which I struggle with a lot. Something that makes me laugh about Balinese restaurants, and accommodation for that matter, is that the staff talk to each other on radios, and so it feels to me like I’m in Gillead – you won’t understand that if you don’t watch The Handmaid’s Tale, but if you don’t watch it you don’t deserve to get the joke 😉 – highly amusing.

We wandered streets for quite a while after dinner, trying to find a taxi – Craig had tried to hail so many that Jessie started putting her arm out and happily yelling “tassie”. We must’ve been in a no pick up zone or something, because it wasn’t until we found our way back to one of the main drags that we managed to get one. Of course tonight Jessie went to sleep the second we lay her down in her cot… ah well, c’est la vie!

Tomorrow is our last full day in Bali… I’m hoping to make it count with a beautiful dinner spot for our last night, but I’m not going to jinx myself by saying where. Fingers crossed for securing a spot at this one 🤞🏻