Monkeying around in Ubud

The resort has a free shuttle into Ubud several times a day, which is great because a) it’s a 40 minute drive, and b) online taxis (such as Uber) are banned in the Ubud area, which I guess is something to do with not taking business away from exisiting local taxis (fair enough… it’s not like they’re expensive anyway). So we jumped on the 12pm shuttle into Ubud – it was a packed 12 seater with not much air conditioning happening (which I thought odd for a resort vehicle) and it was a very slow (traffic) and bumpy ride into Ubud – super interesting scenery if the heat and constant acceleration and deceleration, and a weird high pitched beeping sound wasn’t making me feel car sick!

Once we arrived into Ubud, we got a sense of that solicitation you tend to get most places in South East Asia – people trying to tell us it was too far to walk to the Monkey Forest from the drop off location, but I’m glad we ignored that advice – it was perhaps 20 minutes, and sure it was super hot, but it took us down the Main Street of Ubud town – it was a bit tricky pushing Jessie’s stroller down the street trying to dodge the flow of tourists, and the scooters parked up on the side of the road, plus the footpaths are weirdly narrow, but it was great to be able to check out all the shops and warungs (restaurants) on the way through – it’s an eclectic mix of old buildings, new looking stores (perhaps just the shop fronts) selling designer looking clothing and art, people selling chopsticks for $1, beautiful cafes, gelateris, a few well known brands (Starbucks have made their mark here), markets, and lots of Buddhist offerings and incense. I would definitely like to come back one day, sans child, and explore all of them. 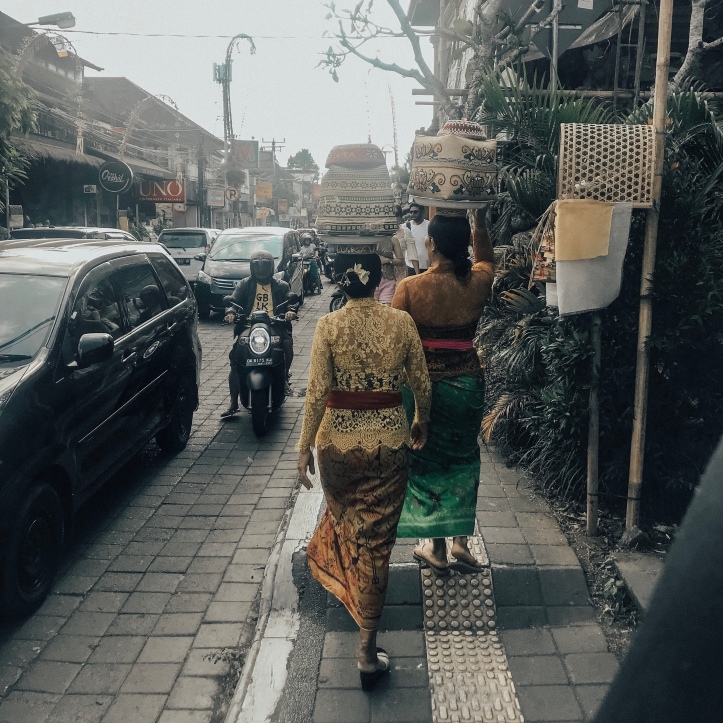 It was incredibly hot, and by the time we got to the Forest (down hill thankfully) the three of us were all desperate for water, so we quickly drank that and then hid it all away from prying monkey hands. Jessie’s entry was free, and for Craig and I it was 80,000 rupiah each, so about $9 each – we had to wait a bit to get our tickets as there was an Australian girl yelling at the ladies in the ticketing booth – it sounded as though she had left a bag with them and something had been taken out of it… I felt sorry for her but I also couldn’t really understand why on earth you would take that risk.

The forest is absolutely stunning and I really need to do some research into it as there are temples scattered through the place which look very old. The monkeys are everywhere and they’re certainly not shy – one tried coming up to us to grab on to the pram… I told it no, and fortunately it decided to head off… it seems like usually any kind of interaction with them would just egg them on – you’re not supposed to make eye contact, which was hard enough for us, so I was a bit worried about Jessie, but it was fine and she loved watching them going about their cheeky antics… they were all “Simba” to her. It rather cracked us up they were eating kumara (sweet potato).

You could quite easily spend a couple of hours exploring the place, but there were a lot of stairs and a lot of people, so we headed back out after an hour, and made our way back uphill, which wasn’t so bad after having a bit of a rest in the shade of the forest. I’d spotted a particularly cute cafe on the way down, so we headed there for a drink and something to eat. I got a smoothie bowl and Craig had a really interesting “pizza” made with a coconut base and the topping was a sort of curried jackfruit – jackfruit seems to be a popular meat substitute here and we realised the cafe was plant based… there seems to be a lot of that in Bali, and I guess that goes hand in hand with the health retreat vibe that lots of people come here for. 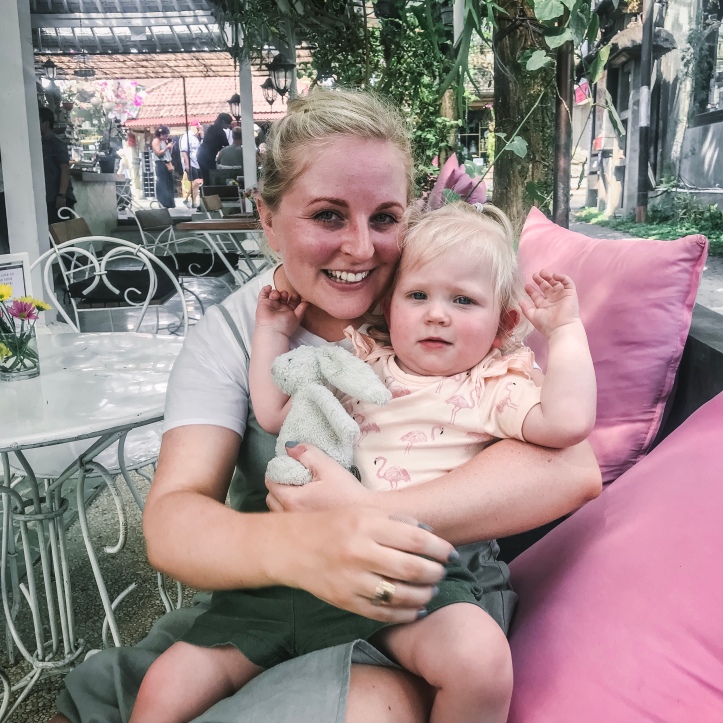 We had booked a 4pm return shuttle, and still had around half an hour to kill after that, so we went back to the drop off point, which was at an art museum, and decided to go inside to get out of the heat… turned out to be somewhat expensive for what it was, at $17 NZD, but it was refreshing to have some aircon and some peace after the hustle and bustle of the last couple of hours.

The ride back was faster than the ride in, thankfully, and Jessie fell asleep so we managed to go for a later dinner instead of having the restaurant open for us again – I’m loving the Indonesia food… I can’t really imagine why anyone would order off the western menu, but I guess you have to cater for all tastes (Rob ;-D).

Tomorrow we have a babysitter booked for a few hours – super excited!