Bunny gained his own independence (AKA, s#%* we lost Bunny)

We started today out a bit more casually, thinking we’d have a bit of a quiet one – a later start to breakfast (I’m now sending Craig first to order Princess Jessie J’s so it’s ready upon HRH’s arrival at the restaurant), and spent a bit of time hanging in the villa before we decided to go out.

I spotted a great Instagram account for families with little ones in Bali, which had lots of great ideas for things to do, and I noticed that a Warung called Mades, in Berwara (next area over to Seminyak) were putting on an Independence Day event for kids, so we jumped in a taxi to get there (it wasn’t within the shuttle’s allowed areas) after the receptionist at our villas told us it’d be about 70K Rupiah – once we got in, Craig said to the driver “70K?” He laughed and said “100K, brother” and when we arrived, Craig once again said “70K?”. He relented very quickly and that’s when we realised that the taxis are metered (after we’d paid him double what the metre came to of course)… it was only about $7, but still. I suppose good on him.

We arrived at the warung to see red and white flags strung up, and “happy birthday” bunting, a bazaar, and face painting around a cute playground (which are hard to come by). We ordered food (a Snow White pizza for Jessie, which had nothing to do with Snow White), which was super, super cheap, ate, and let Jessie play in the playground. It was absolutely full of nannies and their charges… actually I think we may have been the only actual parents there, but it was great! They also have an amazing onsite daycare – a good tip if anyone is thinking of taking their little ones to Bali.

On our trip back we only paid what the metre said (27K 😂)… you live and you learn, right?

Jessie had a decent sleep in the arvo, and Craig brought out an early birthday present for me – the latest book by my current favourite author, Lucinda Riley… I’d finished my first book already (which is great, because I didn’t think I’d get any reading time). I was stoked with the book, and we got some good reading time in, and I also started to look at babysitters for maybe a couple of nights out next week… we will see how we go.

After spending the rest of the afternoon swimming in the main pool, we thought we might go for a wander to the beach and then come back and get Go-Jek for dinner (equivalent of Uber Eats), so we set up the stroller and headed off (but not before I locked in a massage for my birthday tomorrow). It was a lovely walk, given it had cooled down significantly, and there was a gentle breeze. We couldn’t quite find the point where you turn to walk onto the beach and instead found ourselves at the entry of Potato Head, the famous Beach Club… so we thought why not? We definitely weren’t dressed for the occasion, but none of the five or so pre-entry staff seemed to care about that. As it was peak time (for sunset, I suppose), you had to pay 150K per person for entry, but it’s redeemable on food and beverage. Once we entered the club, I instantly felt out of place, but nobody seemed to bat an eye at the fact that we were bringing Jessie in… in fact the staff were super accommodating, and the patrons around us were all taken with the little blue eyed blonde (I’m worried Jessie is going to have attention withdrawal when we get home 😂). So we sat down and relaxed… until… my heart sunk, and I frantically checked the stroller and my bag and asked Craig “where is Jessie’s Bunny”?! Her beloved Jellycat bunny, she loves to death and sleeps with every night, and sucks on the tag for comfort. He looked back at me with horror and said “she must’ve dropped him”. I clearly remembered Craig saying to me “is it ok for her to bring bunny” as we left the villa, but then we were so distracted asking for directions etc, that we sort of forgot she was holding him (I’d normally be all over watching him, because she has a tendency to drop him from the side of the stroller). Craig asked if we should retrace our steps and look for him, and I shook my head and said “no, if he’s on the street somewhere, I don’t want her to be sucking on his tag anymore… let’s just hope she dropped him in the lobby”. We pushed it to the back of our minds and enjoyed the amazing cocktails and food we’d ordered – prawn kebabs to die for! But that’s not where the drama ends my friends, oh no! As we got closer to finishing our meals, it suddenly hit me… we hadn’t intended to end up somewhere like Potato Head tonight and therefore didn’t have enough money on us to pay for what we’d just consumed. Craig had to leave me feeding Jessie her pumpkin soup (glad to get some vegetables in her… I feel like she’s been living on a white diet since we’ve been in Bali), while he raced back to our villa to get more cash (of course this is the one time there isn’t any Apple Pay). In my mind I’m envisioning it taking him half an hour return, and we’ve got a time limit on when we have to leave the table. I feel like the waiter is suspiciously eying me up, so I’m feeding Jessie as slowly as possible, while the people at the table next to us subtly take “selfies” with Jessie in the background. Fortunately Craig found a scooter driver to take him back to the villas, and was back in about ten minutes. Phew… at least that’s one drama solved and we’re not going to be thrown into Kerobokan 😅.

We basically scuttled away from the table as fast as possible after that, and decided to head down to the beach – the sun was setting, and Jessie really enjoyed playing with the sand (so much that she licked her fingers clean on the way home)… it was beautiful! 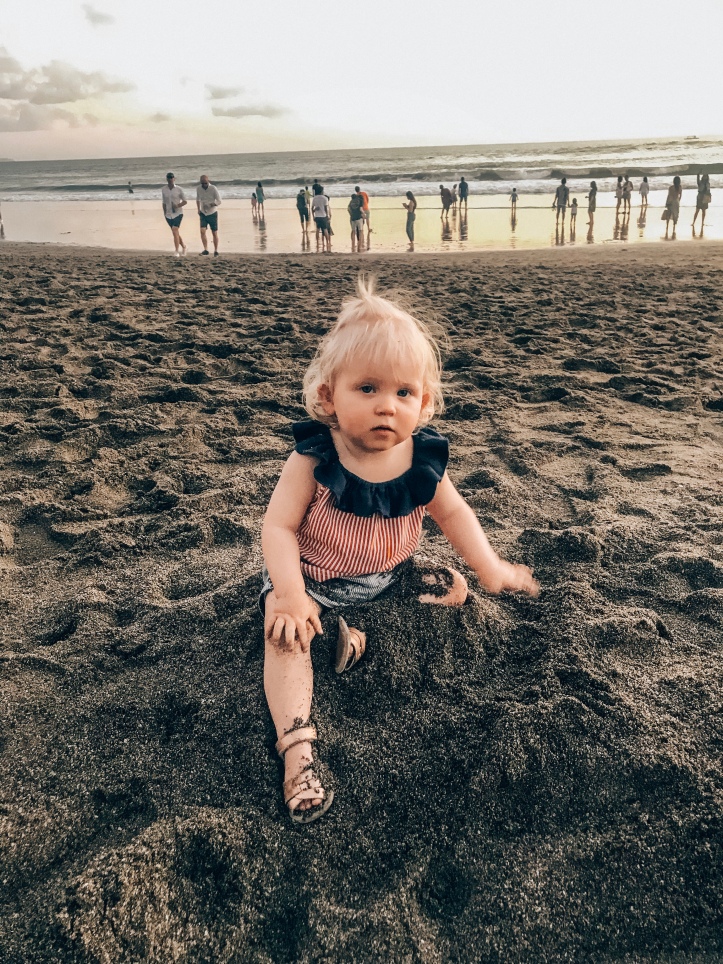 When we arrived back at the villas, we asked the receptionist if anyone has handed in a “rabbit” (can’t say bunny in front of Jessie at this time), and she didn’t speak English very well, so we are holding out hope for the morning when the daytime staff are on. Maybe, just maybe, she dropped it while we were booking my massage? One can hope, as when I started writing this she was in bed calling out for her bunny… my heart broke. I poured myself and Craig a baileys, and she’s since gone to sleep… she still had her Australian Dunnet, which she calls Mouse, but I don’t think it’s going to be easy for her getting over her precious bunny.

Feeling awful, but hoping for a fun birthday tomorrow. Tell you all about it tomorrow night… when I am 30 years old 😩😂

PS there was a frog in our bathroom tonight… I have no idea how he got there!