With big plans for the beach today, we decided to head back to Potato Head (with enough cash to pay this time) – we figured if we arrived at opening time (10am), we should be able to grab an awesome spot, and we were right… though you wouldn’t want to leave it too much longer than that! It’s a really great concept – you don’t pay to get in (except in peak hours, later in the afternoon, but that is still redeemable on food and beverage), take your pick of lots of types of seating (we went for a double day bed with umbrella, storage for your bags etc, and a moveable table for drinks and food), and take advantage of the swimming pool and private beach access… all this for free with the assumption you will be eating/drinking (they do check bags on the way in to make sure you’re not trying to do a BYO). We had the perfect morning hanging out there – we took turns at taking Jessie swimming… she LOVED the infinity pool, but unfortunately the rather large waves on the beach she found quite intimidating, so didn’t last long there. The food they have on offer is really delicious, so we had a really nice lunch before heading off home for nap time – it was incredibly hot and Jessie was absolutely knackered… so knackered in fact, that we got a two hour nap out of her – reading by the pool, and swimming for two hours… blissful!!

In the afternoon, after Jessie woke, the villas were doing some mosquito fogging for an hour, so we popped over to our fave wee cafe, the Coffee Cartel, for an hour and met with our glasses man, who had our new glasses ready. They are all fantastic – Craig has had some very basic frames for the last few years, so he’s loving his new ones, and he’s even more excited for his prescription sunnies… I can’t even imagine going all your life either wearing sunnies and everything being blurry, or not wearing sunnies and just having to put up with the sun in your eyes… it must be life changing for him. Mine are super cool as well, I’m very happy. The guys at the cafe asked me how much I paid, and then laughed… so I guess I was right in that we should have bartered more.

After fogging was done, we went back to grab the pram and head down the road to a restaurant called Biku – a bit more of a traditional Balinese feel to it, with the dark ornate wood look, this was the cheapest meal we’ve had so far – 260,000 RP for three mains and two Bintangs. That’s $26 New Zealand Dollars. Craziness. It was a great spot for kids too, which is a bonus. 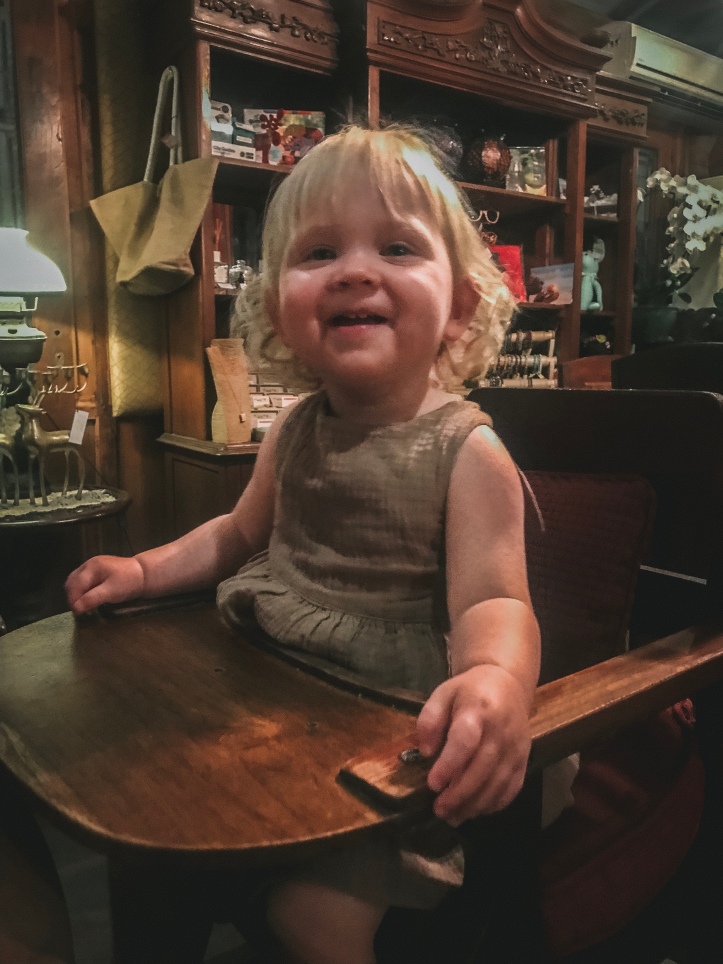 For the evening, we had booked in those massages to have in our villa, which we were sooooo looking forward to. Jessie had been going to sleep at her usual time of 7pm, and even though she has been waking with her teeth annoying her, it normally hasn’t been until 10.30pm or later, but of course (just like the night of the birthday dinner) she would not go to sleep. So, while I had my massage, Craig took one for the team, while his masseuse stood awkwardly waiting for him to come back… he missed most of it as every time he came back Jessie would kick off again. Incredibly kindly, when mine was done, the two ladies offered to both work on Craig for half an hour so that he didn’t miss out altogether, and I took over with Jessie, who finally exhausted herself around 11.30pm and went to sleep. Damn you, Murphy’s Law!

So there were some pros and cons today, but it won’t stop us trying to have our time to ourselves… tonight there will be a DJ and cheap beer by the villas’ main pool… we’re about 10 metres away from the pool, so we’re going to set up a baby monitor and hope that tonight is the night that Jessie sleeps. Still holding out hope. I’ll let you know!