Well, today was the last full day! We decided to get the absolute most out of our pricey Jeep, and so we spent the first 2/3 of the day exploring – I wanted to see the Green Sand beach, and the others wanted to find some good snorkelling spots. We headed out around 8.30am, after grabbing a bite and a Kona Coffee Macadamia Nut Mocha… Yum!!! The first wee spot we found was about 20 mins out of Kona, and it was jumping off the volcanic rock and into the water, no beach. The guys enjoyed it – there were plenty of fish, and Sara was blissfully unaware of the billions of sea urchins. I stayed on the rocks sunbathing and reading – it was a scorcher of a day! Next we decided to head out to the Green Sand Beach, which is at the most southern tip of the island (which also happens to be the most southern tip of the USA). It was quite a long drive and I really should’ve done further research into this, as we got to the carpark to find that it was about a 45 min home each way. You can drive down there, but it is rough and is not recommended for rental vehicles

You can actually pay a man in a truck $15pp to take you down there, but we decided against it and moved on to the next spot. About 5 mins down the road we saw a sign for coffee, and decided to pop in for some lunch – it turned out to be the cutest wee cafe, called Kalae Coffee, and run by a lovely lady who makes all the drink and food. I had a bagel with cream cheese and pesto, and a mango black iced tea – very refreshing. I decided that if I were to retire somewhere like Hawaii, I would like to have a wee shop like that – the little details were great, like the Succulents in round glass bowls as center pieces for the tables.

Anyway, moving along! The boys wanted to see Captain Cook’s memorial (he was killed on this island by the natives) and also hoped to snorkel below it as it is apparently amazing, but that turned out to be a big hike too! I guess that is why these particular places are still in such good nick! We carried on to another wee beach just south of Kona, which is known for great snorkelling. It was packed with people and really didn’t look that promising, but there were heaps of fish, and best of all… Sea turtles!!!! Again, I didn’t go in but the boys took some underwater pics (Lochie lost a flipper in the excitement) and I got a pic of one hanging out on a rock (I like to think he went up there especially so I could see him).

I’m not sure if it was an altitude thing, but I started to feel a bit fluey, so we went back to the resort and I had a nap while the boys had a few Happy Hour drinks in the pool before we had dinner at the resort’s amazing fine dining restaurant, Rays on the Bay. It was a beautiful sunset, so we got a few family pics in front of that before eating. 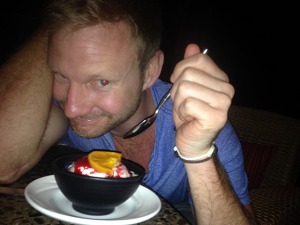 Our flight tomorrow isn’t until about 4pm, so we’re hoping to grab a late checkout and spend a little more time sunning ourselves by the pool before we head home.

It’s been a fantastic holiday in Hawaii and I’d like to come back again and explore Maui and Kauai!

So good to have a day out sans two year old. She spent the day with her Grandad and two uncles (7 and 14) and had the best time, and we had the best time wandering around laughing, talking, drinking and eating 👌🏼
Such fun today at the North Canterbury Wine and Food Festival! Faves this year for us were @the_bone_line Iridium, @thewinemakerswifenz Riesling and, always a classic, @pegasusbaywine Riesling - all of which came home with us 👌🏼👌🏼👌🏼
From the safety of Daddy’s arms. In other news, we both left the party with poop all over our pants (animal poop, not Jessie poop) 💩
🐻TWO YEARS OLD TODAY 🐻 Where on earth has that time gone. Jessie is becoming such a fun little person - she’s been a chatter since she could make noises, but her vocab has really ramped up lately and she tells me, if I tell her I want to change her happy, “I’m good”; and if she doesn’t want me interrupting her play time “goodbye”. She loves tomatoes, terrorising Simba (out of love), reading books, baby shark (help), and singing. She is the best 💛💛💛
Definitely my daughter #welovecarbs
My baby girl... you’re going to be two in just 12 days 😭😭😭😭