Thank you for another lovely hot day, Mother Nature! 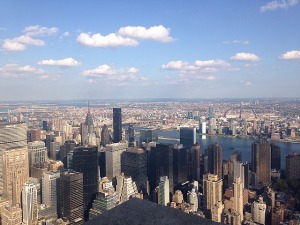 Today we got a number of the “must-dos” done. So in order:

Rockerfeller – I was surprised that they already had the ice skating rink up and running… That’s something I’d love to do in the winter. There were so many people partaking – I’m not sure I’d want to waste a good 23 degree day, but would love to do it when it’s colder.

Central Park – I can’t believe how huge a space this thing takes up! It’s totally understandable that it took 15 years to finish. We had a lovely wee man called Fred driving us around on his rickshaw, and giving us the rundown (albeit I couldn’t hear a lot of what he was saying, partially due to his undisclosed accent, and partially due to the fact that he was talking away from us)

We had a couple of stops to wander around at the angel fountain (which was cool as there were lots of buskers – saxophonist, ballerina, singers, crazy-massive bubble maker guy), and the Bow Bridge (just very pretty, over a pond you can row on and which used to freeze over enough to skate on). He also took us to Strawberry Fields – John Lennon’s memorial (was flipping hard to get a pic of this as people are constantly standing on it), and to see where he lived (and where Yoko Ono still lives). 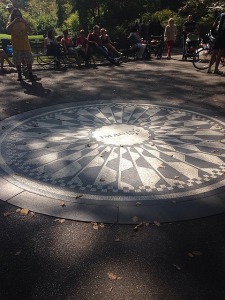 5th Avenue – yeahhhhh, the only shops I let myself go into down here were Zara (where I got a nice dress and top for $65), and Sephora. It was cool to walk down and look at all the amazing window displays in Gucci, D&G, Ralph Lauren etc etc. We also got a hot dog while walking down, which I didn’t actually like that much.

Chrysler Building – we didn’t go up, but we did have a look around the foyer, which was gorgeous! The mural on the ceiling is one of the biggest in the world. This building was the tallest in the city for just one year, but I think it is still the most beautiful.

Empire State Building – we only went up to the 86th floor, as it is $46 to go up to the top (and by this stage I was starting to run out of cash)!!! Once you reach the 80th there is another elevator to go up (which you have to line up for) or you can take the stairs – I can’t believe how many opted for the elevator. We took the stairs!! The view is just beautiful, I’d love to go up at night and see the lights (it is open until 2am if anyone has a late night urge). It was cool to get an idea of how big Central Park really is.

Grand Central Station – just a fleeting visit, but it was cool to see it in real life. Apparently it’s more impressive at night, as the ceiling glows.

On our way back to the apartment we stopped at a Levi’s shop where I picked up two pairs for $80… They’re an amazing fit! I can’t believe the mark up on these at home.For dinner tonight we went to Momofuku, in the Union Square area. We took the Subway to get there, and I think New York wins (over London, Paris and Rome) for heat, bumpiness and congestion… Not a pleasant experience at all (although it is Friday night). Momofuku was brilliant – it is an Asian-Fusion sharing style, kind of similar to King of Snake in Christchurch, but probably a bit more fine-dining. 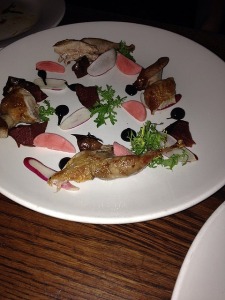 Tomorrow we will do Wall Street end of town, and hopefully the Staten Island Ferry to see the Statue of Liberty, with some Taco Bell thrown in for lunch (got to be done!!). It will be our last full day, and then it’s time to head home. How fast did three weeks go?!

Hopefully I’ll get some sleep – we have some super loud idiots talking outside our window, as well as this horrible machine that they put metal into and then crush it (right outside, starting 6am and going until late… Where is all this metal coming from?)