Wednesday 05 April – Singapore, Singapore
The plane to Singapore was crazy full… I’m not sure there were any spare seats. We had been hoping to nab a Sky Couch, as I did on my Buenos Aires trip – it would have been interesting to see how it worked for a couple, but never mind. Over all it wasn’t a bad flight – we were both so tired for the wedding, and the fight departed at midnight, so neither of us got through the movie (we both tried to watch Fantastic Beasts, so I’ll have to give that a go on the way home), and the lady we were sitting next to didn’t move throughout the whole 11 hours, which was great as she was in the window seat.
We arrived into Singapore just before 7am, and were both feeling surprisingly energetic – maybe the Dreamliner’s lower cabin altitude really does work! We jumped in the first cab in the queue, which is a bit tricky because you are forced to take the next one in line, and ended up in a white cab (this was a mistake, we later learned on the Hop on Hop off bus – the black and white taxis are the most expensive!). The driver was lovely however, and it cost us about $50.
The accommodation I chose (Wanderlust) is located in Little India, and I chose it for two reasons – I like my hotels to have a bit of quirk to them (think the QT or W Hotels), put me in the Mandarin Oriental and I’m bored senseless; the second reason is that it’s a somewhat “local” location – it’s in a strange little street that has some local churches and restaurants on them, and it’s not all pretty and westernised, but it is still handy to everything. Orchard Road is popular for accommodation, but it’s not where the beautiful locals hang. I guess you could say that I like the best of both worlds! 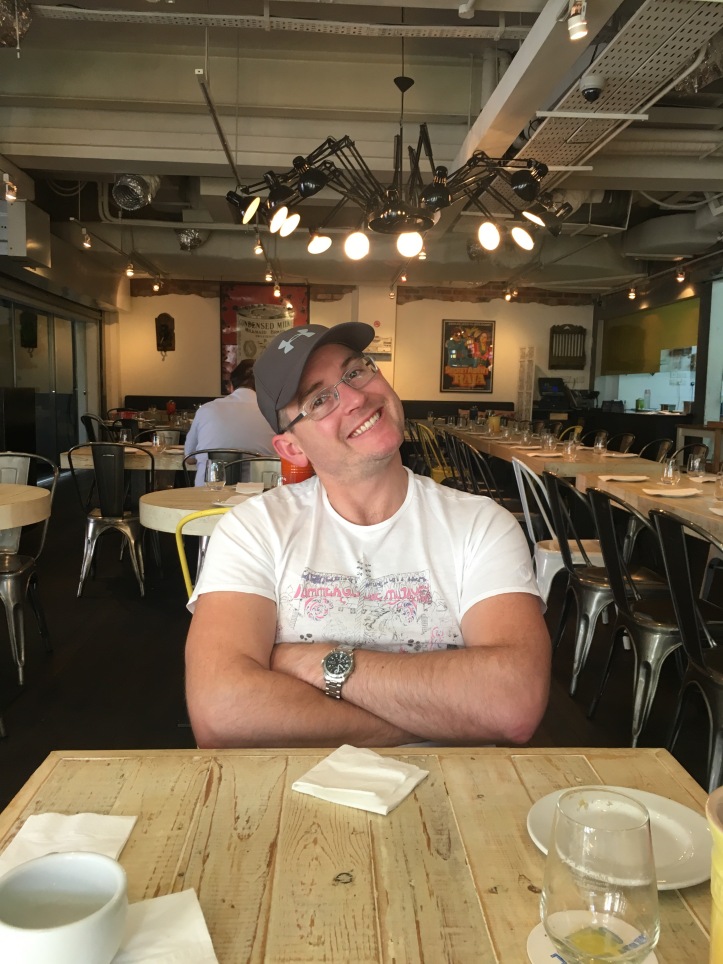 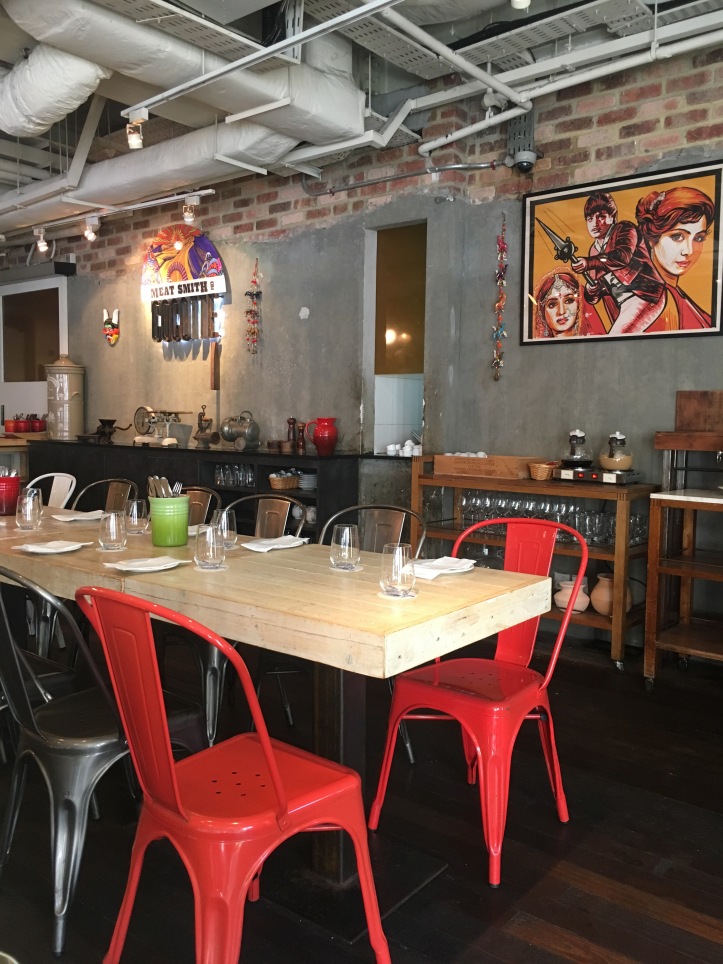 Here are some quick pics of the accommodation – something that really stood out for us was the “handy phone” – this is a smart phone (Iphone lookalike) which you are free to use for your duration of stay, and take everywhere with you – it is pre-loaded with handy information about the city, the hotel and maps. It has data, which you can also use to hotspot your own device while out and about, and you can also make free local calls. This is completely complimentary. Amazing. Every hotel should do this!

I thought we might be in need of a nap after checking in, but we were both feeling so good that we had our free brekkie (we had booked the night prior for early check in, so breakfast was included) – really unusual but delicious brekkie options, not just your standard hotel buffet, it’s all a la carte, and they served chai masala tea – omg! I had two cups of this, which I shouldn’t have done as it is soooo sweet, but it was delicious. After brekkie was headed out… this was a bit of a mistake as it was only around 8.30am, and it turns out that most of the shops in Singapore don’t open until 10.30, or even 12 in some cases! So we were hanging around Bugis Junction for a while before it opened, but we went and got a coffee and Starbucks, and it was fine.

We had a look around Bugis for a while, but it’s such a huge maze and we weren’t really in the mood for mall shopping, though Craig did find a book he’d been looking for, so he was pleased about that.

After Bugis, we headed down to Haji Lane, in the Malay area – this is a most do… it is soooo cool. Just one lane, packed with boutique stores and a few bars/restaurants. The first shop we came across was a cat cafe – yep, you go in and you hang out with the cats while you have your drink. We figured this is because it would be pretty impossible for the vast majority of Singapore’s locals to own pets. It’s such a gorgeous idea and they all look well cared for. A lot of the stores in Haji Lane were still not open at this point (around 11am), so we settled down at one of the bars for a drink (by the way, alcohol is crazy expensive in Singapore, so you might want to ask how much before buying something) and did some people watching – right in front of us there was some kind of mini movie/fashion shoot going on, which entertained us for quite some time. The girls in Singapore are all so well dressed, it’s fascinating, and Craig and I were talking about how that often seems to be the case with bigger cities. 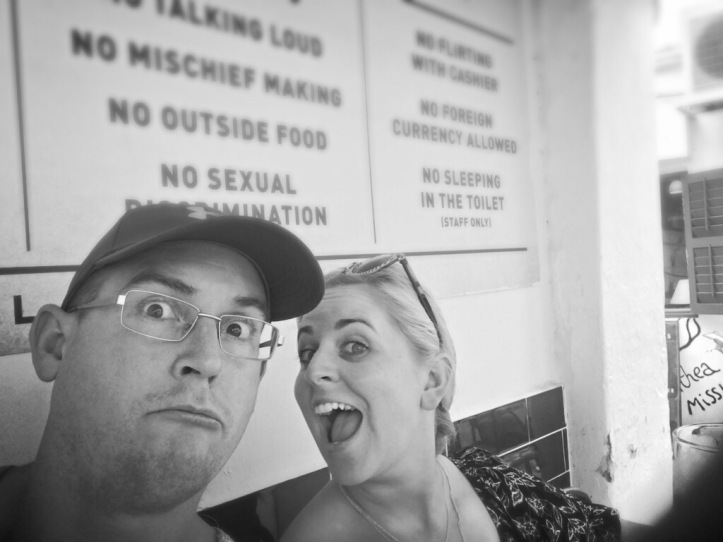 Once the stores were open, we went and had a look in a few, and I bought some cute dresses – the clothes are often so unique – and some earrings, before we headed back to our hotel.
In the evening we had a night tour of the city booked, so we went an chilled out for a bit, and then asked the concierge where was good for a snack before we headed out. He pointed out a place just down the road, and so off we went. We are so glad we did this, as it was incredibly local (to the point that the local diners were asking for selfies with us) and delicious. We got things like an egg and cheese prata (basically a crepe with egg and cheese, which came with an amazing spice dipping sauce), and a mutton noodle soup. These two items came to about $8. Just craziness… we figure at the westernised restaurants you are paying more for cleanliness and things, but definitely you can get the taste for nearly nothing.

After this wee treat, we were picked up from the tour company, and after a bit of fluffing around, we were on the rooftop of the bus and heading towards Gardens by the Bay (after our very pedantic, verging on crazy, tour guide had explained to us exactly when we needed to be back at the meeting point about 50 times).

Gardens by the Bay is an attraction that everyone should visit in Singapore – it is free to a certain extent, and every night at 7.45 there is a free light show, which is choreographed to classical music (not dissimilar to the Dubai fountains, if anyone has been there), which lasts for 15 mins. You lay down on the grass (but beware of flying beetles hitting you constantly until it is dark) and look up to the branches of the trees. It’s really quite magical, we loved it. 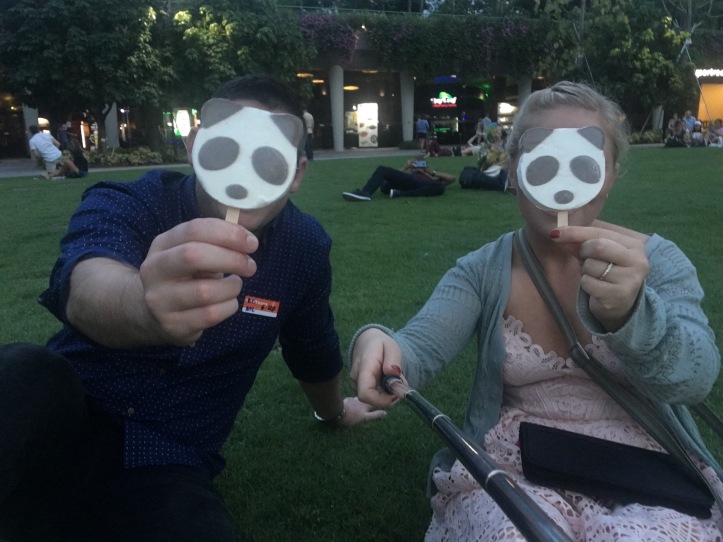 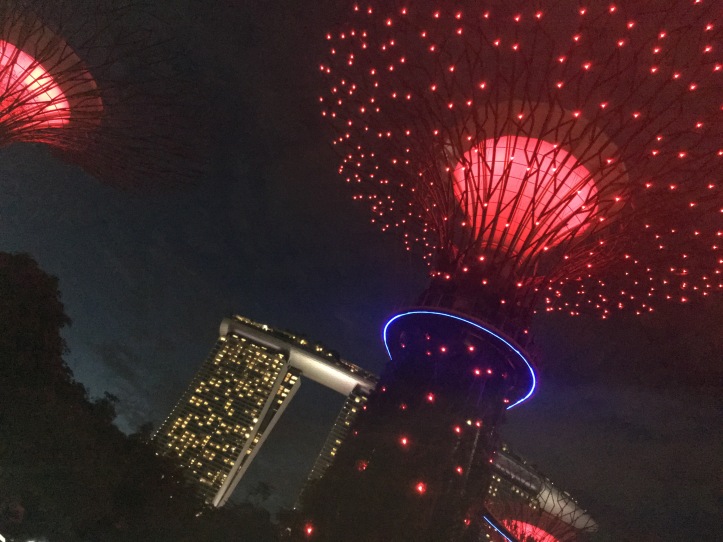 Once back on the bus, they took us to Haji Lane – it was interesting to see it again in the evening when it was a bit more about the bars – and then on a boat ride around Clarke/Boat Quay… it was interesting to hear a bit of the history about the river and the buildings on its bank. Some of the facts we did feel a bit dubious about though – apparently the banks all have their headquarters in Singapore because there are no earthquakes and their buildings won’t get destroyed. Hmmmm!? 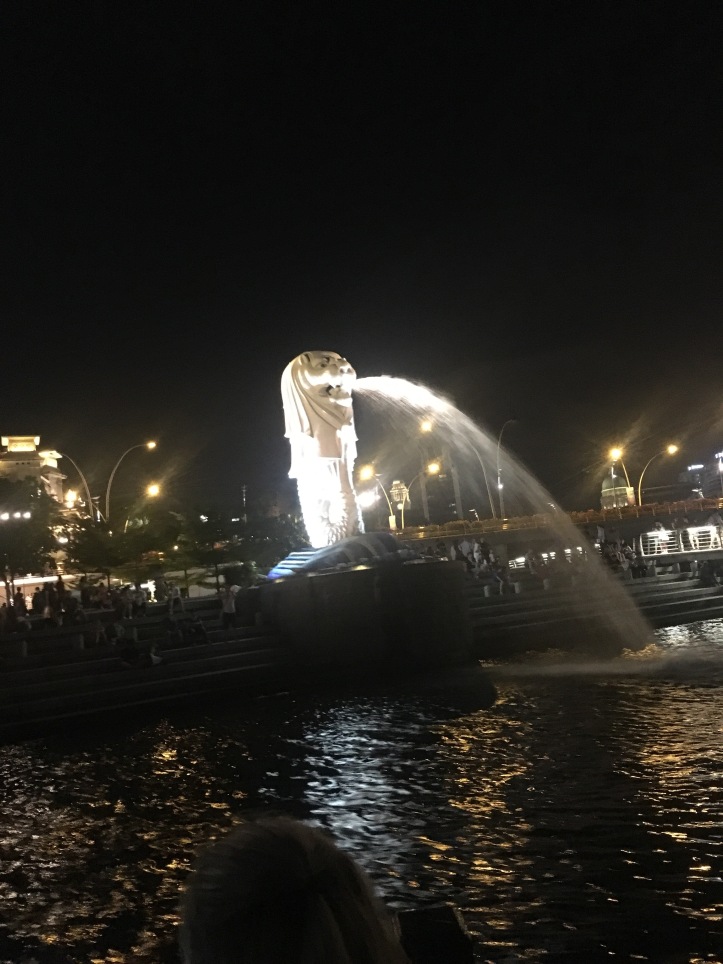 After the boat ride we were in Clarke Quay, which is always fun at night time. The Long Bar at Raffles Hotel is under renovation at the moment, but I felt that it was mandatory for Craig to try a Singapore Sling, so we found a seat at one of the many restaurants, Wings, and ordered our Slings and some Chicken Wings (yes, I am stoked that this rhymes). It was fun to sit there and listen to the live music.

After this, we were planning to head to Altitude Rooftop Bar, and 1 Raffles Place, however I am a bit sick at the moment, so we decided to do this on our way back home, so we went to get in a taxi but got beckoned to a Rickshaw instead. I love riding in a rickshaw – warm weather, bit of a breeze. The man who took us was hilarious, as they often are, and even had a little Bluetooth speaker with some music playing – Final Countdown, One Night in Bangkok… all the goodies! And he took us back to our home for $30. Would a taxi have been cheaper? Probably, but definitely not as fun!! 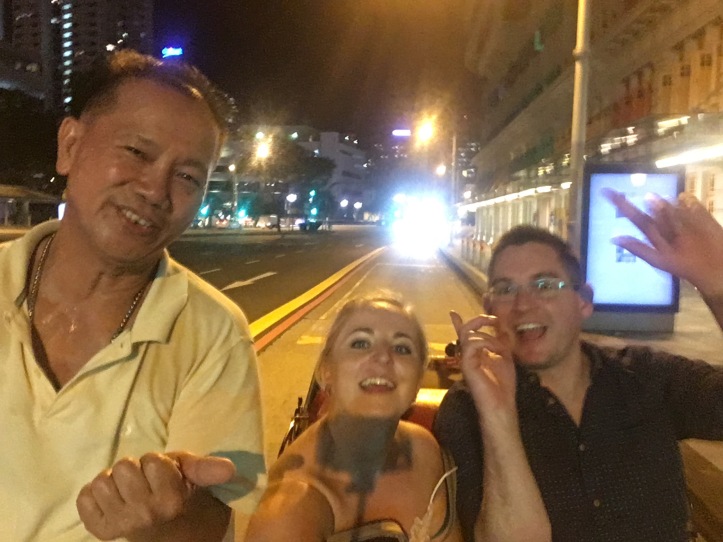 What an action packed first day! I think Craig loved his first impression of Singapore, the country I believe is a destination and not just a place to transit. Looking forward to coming back after Siem Reap!!